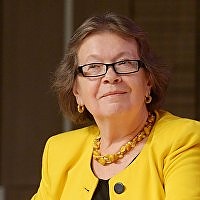 She is Head of the Zinoviev International Research and Education Centre at the Moscow State University, Department of Global Processes; Director of Alexander Zinoviev Biographical Institute; Head of the Compatriots Project led by United Russia Party (on a non-partisan basis); Co-Chair of Rossiya Segodnya’s Zinoviev Club; Editor-in-Chief of Zinoviev magazine; Vice President of the Europe-Asia International Piano Competition; producer of The Scream ballet based on Alexander Zinoviev’s novel Go to Calvary at the Odessa National Academic Theatre of Opera and Ballet which premiered on May 15, 2014.

Since 1978 until now, she is the senior human rights activist for emigrants from the former Soviet Union having experienced all the problems and worries of the 21-year exile alongside her husband.

Her articles are published regularly by the media. She often speaks on the radio and television in Russia and abroad.