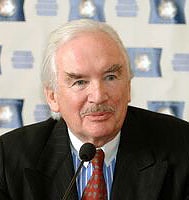 Horst Mahr has and MD in economics and political science and a PhD in political science. The topic of his dissertation is the Middle East. Especially popular among his books are "Baath Party, a portrait of the Pan-Arab movement" (1971) and "Egypt in the foreign policy of the United States and the Soviet Union after the Suez Crisis of 1956" (1994).

Currently Dr. Mahr is chairman of the German Association of Foreign Policy and the Banking Association for Central and Eastern Europe (BACEE); Vice President of the University of Munich; member of the Board of the International Institute for Ethnic Group Rights and Regionalism (INEREG), Munich; of the Academic Council of New Policy Forum (Gorbachev Forum); of the International Academy of Information, Moscow; of the Reform Club, London; Military and Navy Club, Washington; Rotary Club Grunwald.

Federal Cross of Merit of the Federal Republic of Germany